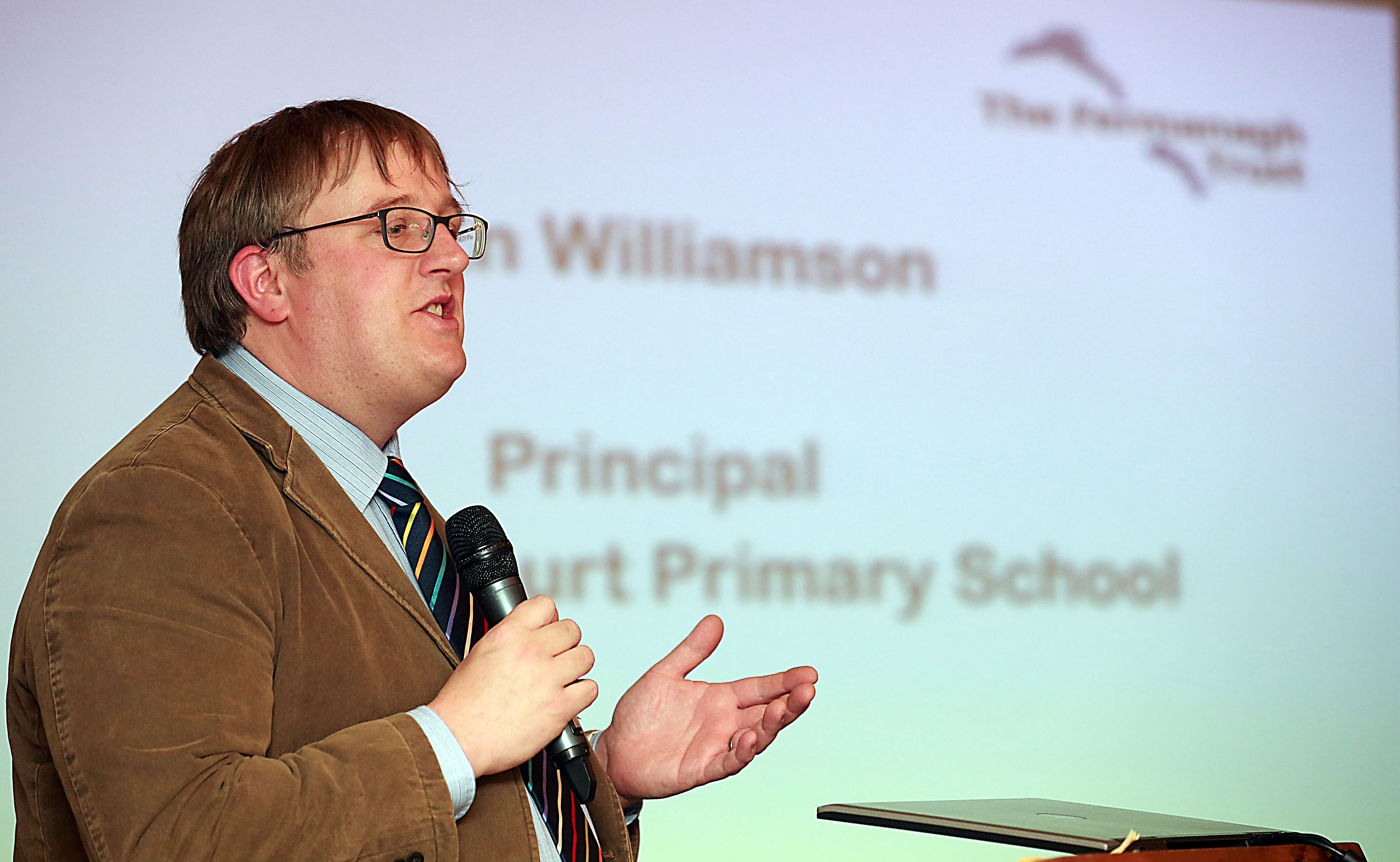 Well it’s a little like déjà vu to be standing her in the Lough Erne again speaking about Shared Education amongst our friends and colleagues here in Fermanagh. Last I was one of the Fermanagh Chuckle Brother as Principal at Tempo Primary sharing with my college Mr McCann. Today I one of the four stooges which form the Claddagh Glen Learning Community which represents the four school from Florencecourt, Mullmesker, Killesher and Kinawley.


As I reflect on the past five years of Shared Education I struggled to encapsulate our experiences into a short space of time. Like all good sermons I finally settled on three points which for me described what shared education has achieved in the areas in which I have been involved.


The first is the Shared Education has opened doors.


It opened the doors of our school to pupils, parents and the community from across the areas our schools serve. – Classes parents nights community events – coming together around shared learning, common issues and community development. - Finding common ground on which to build relationships.


I know this seems simple but our school became place places of learning for both children through shared classes and for teachers through shared staff development.


Through shared classes it opened doors to a variety of buildings, places and sporting facilities. In Northern Ireland and inanimate object like a hall or a playing field has an undeniable religious or political association. The effects of the troubles cemented and polarised these opinions.


Yet here we were in Halls and pitches associated with “the other side,” doing what kids do – learning together.


One of the comments that has stuck with me from one of the principals involved in our current partnership whilst working with a P1 play related project was “the P1’s see a teacher as a teacher, and in whatever group they worked that day the grown up was that teacher it didn’t matter what school the teacher came from but for that time that person was their teacher.


The openness of doors, the willingness to invite and the freedom for people to walk through them for me was obvious last weekend at Florencecourt PS  school fair when on Saturday morning we saw children and staff from all of our Claddagh Glens school attending and taking part in our fair.


It seems simple, but the only reason that most of the people who were there on Saturday from our 3 partner schools would have had to be in Florencecourt Primary School 5 years ago might have been to vote in an election. Certainly not to spend time socially together.


The second theme that shared education in my experience developed was that of opening minds.


As the doors opened and schools became normalised the challenge to start to open minds began. The one incident  that I lost the most sleep about in my involvement in shared education happened early on after the first years of involvement in Tempo. The children had been using the excellent facilities of the local GAA Clubs pitches located between the two schools in the village for a variety of sports over the previous year.


At Tempo primary we had fantastic hard play facilities but were sadly lacking in grass for our sports day. Common sense would say use the dry, well maintained pitches the kids had used all year for Shared Education.


The reality of my concerns was would our entire parent body follow us, when it wasn’t  Shared PE class and was in fact the controlled school using a place with a strong cultural association which they may not have felt comfortable with in the village.


The question was we had opened the doors for the kids but had we opened the mind-set of the parents to make this work. On the morning in question I arrived in school smiling outside but worrying inside, we were to meet in school and all head to the pitches together. Children took parents by the hand and off we went. Our sports day was the best ever, no skinned knees from falling on tarmac. Shelter and seats to watch the events in the stands.


An the anticipated aftermath – Not a word but wasn’t it a great day, should have done it years ago, what an unbelievable set up there that we didn’t even know was there.
Simple things, common sense but a door and minds opened and led by the children.


It made the most of Principals and teachers, rooted in their own contexts, able to lead and drive shared education to maximise its own potential in their schools. It allowed leaders to lead, it resourced opportunities for the children, opportunities which could be as adventurous as we could dream and yet most importantly had the permission to fail, and reimagine if we at any time overstretched.


It wound and bound the schools involved in the partnerships I have known. It maximised the potential of staff through shared expertise. One helping another, sharing practice, planning together supporting one another. It released the potential of school leaders to undertake aspects of the school improvement cycle together. It unlocked the potential of individuals for the mutual benefit of all. It filled a generation of children with the potential of developing friendships which will last into the future as they transfer  to post primary and the shared opportunities that exist there.


Finally it has left Fermanagh as an area and a community of learners who are filled with potential in the words of some politicians of a previous generation a generation for whom a lot has been done, a lot more to do in the future.